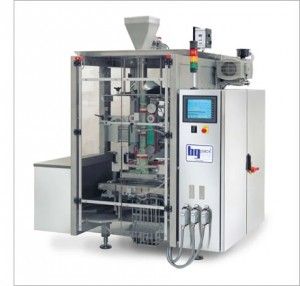 The Vetta vertical, form, fill and seal machine has been designed to make bags from reels of flexible materials (laminated materials, such as polyethylene + polyester, polyethylene + paper, polypropylene as well as simple polyethylene).

The working principle is split in two main functions:

– Sealing of the bags

The film unwind system is composed by two vacuum belts, working in contact with the forming tube, which pull and measure the length of the film.

The sealing system is composed by a vertical sealing bar and two cross sealing bars, heated by means of cartridges; the temperatures are controlled by electronic thermoregualtors. The film pulling speed, the sealing time and the temperatures can be individually set and can be varied independently among one another.